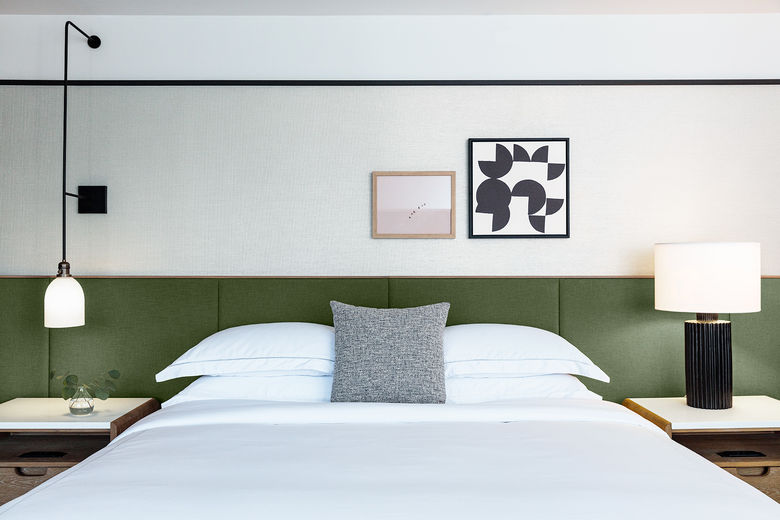 The reimagined hotel will include 216 guest rooms and suites, a vibrant living room lobby, a refreshing private pool and over 4,000 square feet of meetings and events space. Guests will enjoy beloved Kimpton perks and amenities such as morning coffee and tea service, evening social hour, “Forgot It? We Got It!” program, complimentary PUBLIC bicycles, in-room yoga mats, fitness center and a liberal pet-friendly policy. The crown jewel in the Sylvan will be its dining and drinking programming. The first venue to open will be its ground-level restaurant with easy pedestrian access off of East Paces Ferry Road. Delivering an old Hollywood vibe, the restaurant will feature 175 seats, including its elevated bar and outdoor patio, and serve Continental cuisine and a cocktail menu heavily focused on the classics. Shortly thereafter, the tucked-away, ground-level garden bar and 9th floor rooftop lounge will open. The latter will bring a stark contrast to the mid-century look and feel of the hotel with indoor and outdoor spaces that pop with vibrant, bold colors, playful design elements and cheeky neon signage.

The Sylvan Hotel will have a decidedly residential feel to it, with its tree-lined landscaping effortlessly blending in with Buckhead’s established history and aesthetic. The name itself, Sylvan, which is derived from the Latin word for forest, silva, references Atlanta’s “city in a forest” vibe felt especially in the neighborhood’s canopy of trees. Soon-to-become a landmark in its own right, the Sylvan will blur the line between indoor and outdoor, bringing the lushness of its outdoor garden spaces in to the greenery and transformative designs of its interiors. Guests and locals alike will enjoy the hotel’s and restaurants’ proximity to the neighborhood’s many cultural attractions and appreciate the tucked-back feeling from the hustle and bustle of the main thoroughfares. The Sylvan’s sought-after restaurants and bar scene and its team’s genuine, heartfelt Southern hospitality are sure to establish a sense of community for all locals who dine and visitors who stay.

To lead the team managing this Buckhead boutique hotel, Kimpton tapped one of its seasoned alum, Tristan Haas, to serve as the property’s general manager. Haas’s hospitality career began over 14 years ago in Atlanta. It then took him to Ohio where he joined Kimpton as part of its opening management team for its new Kimpton Schofield Hotel in Cleveland. Continuing his growth within the company, Haas then became the general manager at the Kimpton Carlyle Hotel Dupont Circle in Washington, DC. Now making his way back to the city where it all began for him, Haas is set to lead the Sylvan team and will oversee and manage all aspects of the hotel’s opening and operations.